The Bay Crossing Study Tier 1 Study was conducted from the fall of 2017 until the spring of 2022 and is now complete.

Following analysis of transportation and environmental conditions presented in the Tier 1 Draft Environmental Impact Statement (DEIS), comments received from the public, and concurrence from resource and regulatory agencies, the MDTA and the Federal Highway Administration (FHWA) have formally identified Corridor 7 as the Preferred Corridor Alternative (PCA) for the Bay Crossing Study: Tier 1 NEPA. 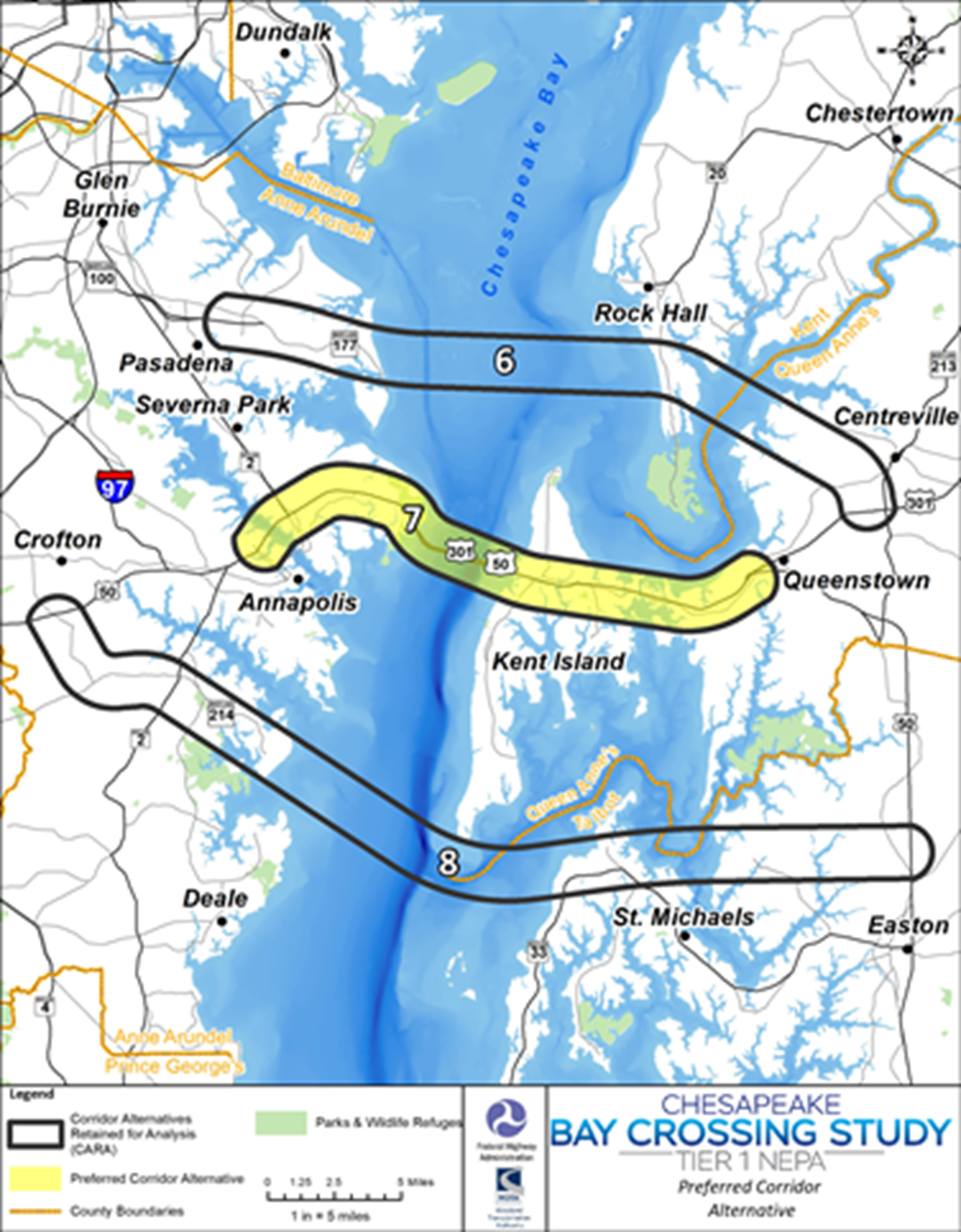 The analysis of traffic, engineering, cost, and environmental considerations indicate that Corridor 7 would have substantial advantages over the other Corridor Alternatives Retained for Analysis (CARA), Corridors 6 and 8. (See DEIS Chapter 5) Major conclusions of this analysis include:

The public was able to view and comment on the Tier 1 DEIS for a period of 84 days, from February 23 through May 17, 2021. The Notice of Availability was published in the Federal Register on March 5, 2021. The DEIS was available on the project website starting February 23, 2021, and MDTA held live testimony sessions beginning on April 14, 2021. In-person testimony sessions were held on April 21 and April 22, 2021.

Public comments emphasized themes such as the need for traffic congestion relief, especially during peak summer travel times. Comments identified questions about the basis for future travel projections, whether recent mobility changes due to the COVID-19 pandemic should result in a reassessment of the project Purpose and Need, and the long-term impacts of All-Electronic Tolling at the Bay Bridge. Other commenters raised concerns over the potential for additional capacity to impact local roadways in the vicinity of the Bay Bridge, and concerns for land use change and environmental impacts.

Most agency comments were generally in agreement with the findings of the Tier 1 DEIS and the MDTA Recommended Preferred Alternative (RPCA), Corridor 7. Agencies expressed a desire to continue to participate in a potential future Tier 2 study and provided input and recommendations for Tier 2 concerns such as detailed impact analysis, mitigation, and other considerations. Some of the local agencies disagreed with the basis of the study but have since expressed support for a replacement bridge in Corridor 7. Responses to all public and agency comments will be included in the Tier 1 Final Environmental Impact Statement (FEIS).

The MDTA requested and has received a response of “concurs” or “no objection” on the PCA as of October 6, 2021, from the FHWA and all seven cooperating agencies, which are:

As a result of the analysis, findings, and concurrences received, Corridor 7 will be identified in the Tier 1 FEIS as the Preferred Corridor Alternative.