The Bay Crossing Study Tier 1 Study was conducted from the fall of 2017 until the spring of 2022 and is now complete.

The No-Build Alternative includes existing infrastructure, all currently planned and programmed infrastructure projects as of Project Scoping in 2017 and regular maintenance at the existing Bay Bridge. As noted in the Purpose and Need, the existing bridge experiences extensive congestion today. Maintenance activities and incidents contribute further to that congestion. Analyses demonstrated that these conditions were expected to worsen in the future, as traffic volumes continue to grow.

The MOA include other modes of travel such as ferry and transit, as well as improved operations at the Bay Bridge and on the existing roadway network. The following four MOA were identified:

TSM/TDM consists of infrastructure and operational changes to improve operations of the Bay Bridge and existing roadway network without adding major new capacity. Improvements could include variable tolls, changes in the reversible lane operation at the existing Bridge and/or other similar strategies.

A new BRT service between major destinations on the Western and Eastern Shores was considered. BRT is a high-quality, express bus service with features that enhance convenience, reliability, and travel times compared to typical bus services. It was assumed that the BRT service would use the existing Bridge to cross the Chesapeake Bay.

A new rail line and implementation of a new rail service between major destinations on the Eastern and Western Shores was also considered. It was assumed that a new Chesapeake Bay crossing would need to be constructed to carry such a rail line across the Bay. The Rail transit alternative would include consideration of both Heavy Rail Transit and Light Rail Transit.

The development of Corridor Alternatives included a broad geographic area to identify a reasonable range of corridors throughout the full extent of the Chesapeake Bay in Maryland, over 100 miles from north to south. The MDTA identified 14 Corridor Alternatives, which are approximately two miles wide and vary in length. Each extends from a freeway or major state highway on the Western Shore to US 301, US 50, or US 13 on the Eastern Shore.

The fourteen Corridor Alternatives run generally perpendicular to the shorelines, connected to peninsulas or long stretches of Chesapeake Bay shoreline, and avoid mouths of rivers or other large bodies of water where possible. The corridors are also generally located to avoid towns and developed areas where practical. 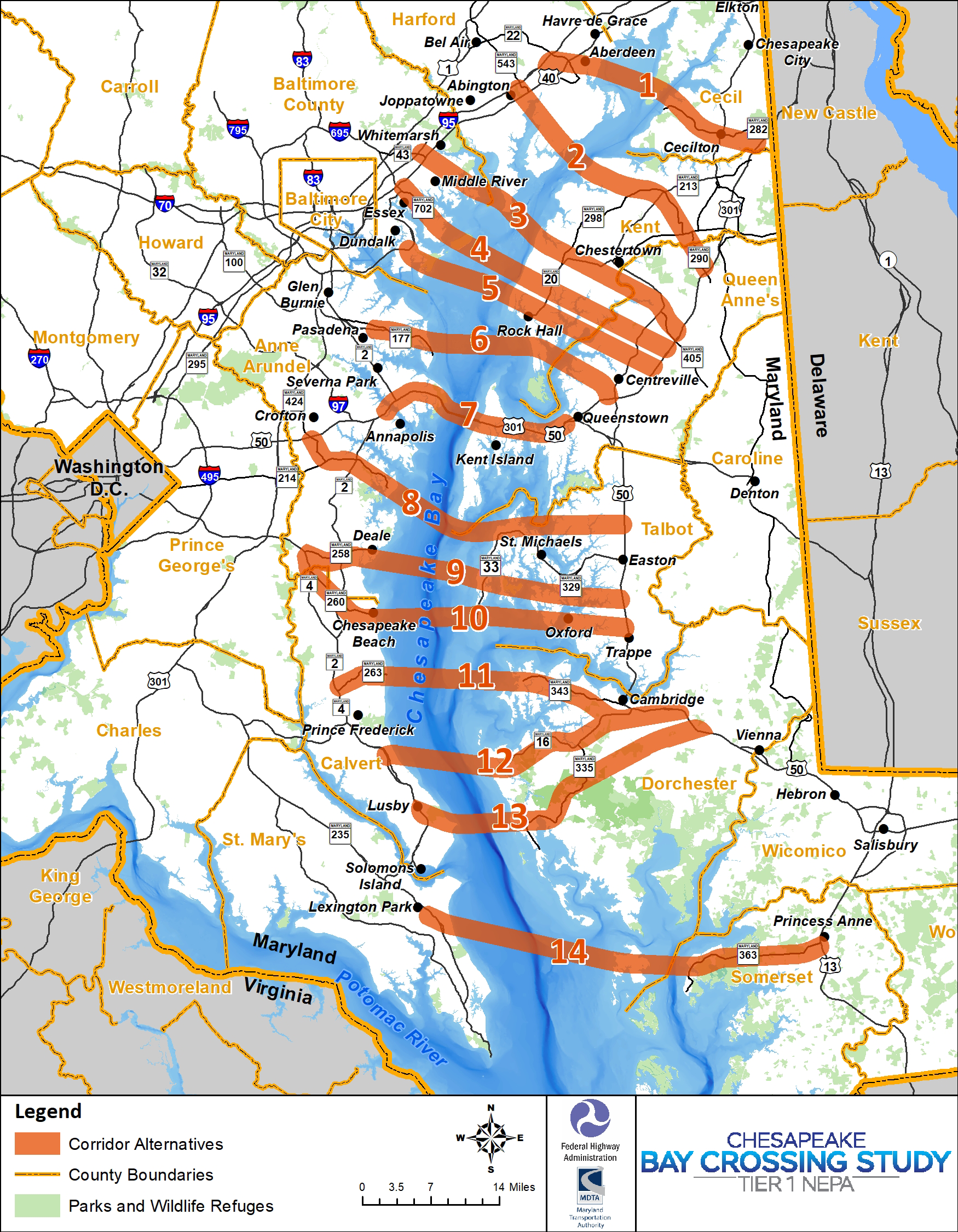 To englarge the map, click anywhere on the preview image above.